But What Do We Know?

We are committed to co-creating an open medium of thinking, knowledge exchange, and deliberation that aims to identify structural features & relational processes of systems that–perhaps counterintuitively–perpetuate the problems that they purport to treat. We aim to identify these iatrogenic dynamics, so that we can think about the principles, constructs, and relational characteristics that may be in need of re-engineering. We hope that a practice of exploring what we think & what we do, and how we think & how we do things, could mediate collaborations that produce knowledge, tools, and/or processes that lessen unnecessary human suffering.

Relational Approach: A Comment on How We Strive to Think and Interact in Order to Enable Function

In order to effectively work and intelligibly exchange ideas together, it may be helpful to start with what we do not know. We like to remind ourselves that the concept of uncertainty is inherent to any conceptual framework. From the heart of the scientific method (which allows for the rejection of the null, but not for an assertion of ‘truth’), to our concept of “self” identity, uncertainty makes what we think or believe “fuzzy”. It makes it a probability. As we communicate, we at But What Do We Know? strive to become curious and aware of our perceptions of “ourselves” in relation to “others”/”the external world” and vice versa, lest we run the risk of a) letting our preconceived expectations close us off to potentially generative interactions and/or b) letting the reflexivity of our preconceived expectations and notions about “things”, make them to be so (see active inference). In Desmond Tutu’s words:

Language is very powerful. Language does not just describe reality. Language creates the reality it describes.

Please note that a more thorough analysis of the concept of “self” is found in the “Social Identity, “The Self”, and Ego”  topic area.

When we define ourselves/others within role-based hierarchies that implicitly value some individual archetypes over others (for example, individuals who write policy for a living are assumed to possess more ‘knowledge value’ than those who sell cars for a living), do we pigeon hole each other? Extant socioeconomic power hierarchies could be functioning to mediate net harm because, at the individual level, they can incentivize self-serving, socially and intellectually dishonest behaviors- behaviors that are driven by a desire to ‘ascend the ranks’ in order to be seen as influential in order to act with power over others. It seems ironic that these social structures may have initially come about such that actual ‘good work’ was rewarded appropriately: those agents who were the means of production of the good work probably never cared about receiving credit for it in the first place– that social reward was merely a byproduct of an initial goal to do good work for the sake of good work itself and for the sake of solving problems. Over time, we see a system that conditions people and groups such that they can no longer distinguish between a priori ‘socioeconomic credits’ and novel value production (a.k.a. good work). As a result, we see a lack of novel value generation because agents avoid the production of ‘good work’ entirely. These agents achieve this by signaling and amplifying their existing social/economic credit which creates the illusion that they do ‘good work’ even in the absence of anything substantive. This is then reinforced (the system can no longer distinguish between what is good work and what is being made to look like it is good work) leading to agents accruing more socioeconomic credits without a corresponding output of ‘good work’. This mutually reinforcing dynamic, particularly in academic settings, undermines the honest pursuit & co-production of knowledge. This is not conducive to individual/collective progress. Under circumstances where engaging with powerful others, status, money, security, etc. become the primary driver (and outcome) of participation, rather than the process of honest work itself, it becomes hard to disengage from the rat race. 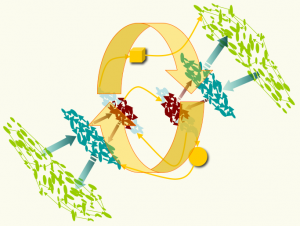 Identity, like infinity, is not an object or idea that can be quantified or captured (even built objects are not entirely defined according to Schrodinger), but rather a concept of potentiality that eludes definition because “it” is continuously changing. Perhaps our individual differences appear to distinguish us on the surface, but the pattern that we are all differentiated and continually changing, is, in and of itself, a ‘same-ness’ that unifies us in and across the diversity of our embedded human experiences. It is likely that we will always have our differences in opinions and values at any given time in space, and relatedly, we may always differ in the ethical and epistemological assumptions upon which our reasoning logics operate. Those divergences are good when debated and discussed with mutual acceptance, respect, and the implicit understanding that we all have equal potential to bring something constructive and essential to the table…wherever (or whenever) that table may be.

Here at But What Do We Know?, we don’t care about “who you are” in the sense that we are not interested in the sorts of nouns or conditional attributes that some people commonly use in order to conceptualize and represent themselves.

What we are interested in, is what and how you think, and how you interact with us in the space of respectful, honest, and thoughtful discourse. We hope to iteratively [re]model the “kind of person that we are” vis-a-vis the ways in which we continually interact–in process–with one another and ourselves..

The Portal with Eric Weinstein